Welcome to The Mouse House Movie Club. Each week (or whenever I get the chance), I dig out a Disney film (either animated or live action) from my shelf, pick a Disney short, and watch both together in one superb evening of Disneyfied goodness. I then write about it in a blog much like (well, exactly like) the one you’re about to read. So, without further ado, here’s this week’s edition of The Mouse House Movie Club.

Short Film: Corn Chips, in which Donald Duck’s hankering for some popcorn is undone by pesky chipmunks Chip and Dale.
Feature Presentation: Tinkerbell and the Great Fairy Rescue, in which Tinkerbell’s caught by a kindly little girl and the other fairies need to come to her aid.

Corn Chips
Donald Duck is the greatest thing ever. This is fact. Scientific fact, proven by science and therefore utterly indisputable. 1951’s Corn Chips is an excellent stage for his talents because it’s so delightfully simply: Donald wants some popcorn, but so do Chip and Dale. Conflict ensues because, as ever, Donald is a selfish, egomaniacal, and often downright nasty character who could start a fight in an empty room. (And indeed has).

Along with getting the very best out of Donald, Corn Chips showcases 1950s Disney animation at its very best. Here, Donald finds himself out in the country during winter, so there are some lovely snowy rural scenes, all captured with ’50s Disney’s sweeping romanticism. It’s not quite up there with, say, Lady and the Tramp, but it’s not far off, and for a short (with a significantly lower budget) that’s pretty darned impressive.

A significant jump forward from last week’s disappointing Pluto short, and a delight for anyone who loves manic Donald and beautiful background art.

Tinkerbell and the Great Fairy Rescue
Part of The Disney Review’s remit is to cover some of the lesser-known films – the live action features and the direct-to-video sequels and spin-offs. That’s what drew me to the Tinkerbell series, which I was familiar with having gone through it last year during a direct-to-video viewing marathon. So for the second entry in The Disney Review, I wanted to cover a Tinkerbell film, and opted for my favourite of the series, Tinkerbell and the Great Fairy Rescue. 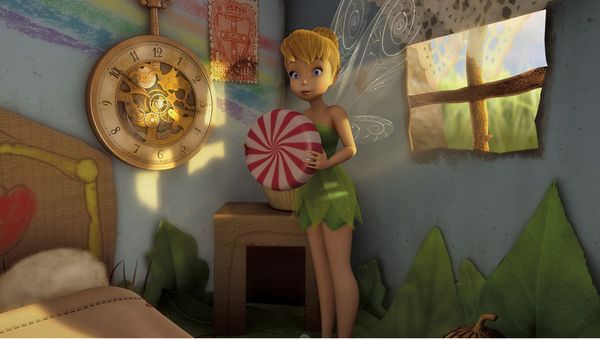 A new Tinkerbell
The Tinkerbell of the Disney Fairies series ain’t your Daddy’s Tinkerbell. And, with all respect to Peter Pan‘s rightfully iconic take on the character, that’s most definitely a good thing. For Walt, Tink was a mischievous imp who was jealous of Wendy and enjoyed causing trouble. There’s nothing wrong with that and it works tremendously well in the context of the film, but in Peter Pan, Tink is sidekick, not leading lady. In the Disney Fairies series, that’s reversed, and the impish Tink simply wouldn’t work. There’s not enough there to sustain one film, let alone a series of them.

So what we get here is a much more rounded Tinkerbell. There’s still a sense of mischief, but it’s filtered through a curiosity that’s part of her role as a tinker (a builder essentially) in fairy society. Tinkerbell finds fascination everywhere and is always looking to create or fix things. This leads her into the kind of trouble she’s most commonly known for, making the update typical of what the Disney Fairy series does so well: presenting Tinkerbell as we know her, but carefully and respectfully updating her.

E.T., but with fairies
The trouble she finds herself in here leads her into the path of a human, marking the first time fairies have come into contact with humans in the world of the film. The little girl in question is Lizzie, the daughter of a scientist who can’t find time for her and who doesn’t believe her fantastical stories because, well, there are no facts to back them up. She’s a lot like Tinkerbell – a creative soul whose imagination is often overlooked by those around her – and the two, of course, strike up a fast friendship.

The set-up isn’t particularly original, and certain scenes are highly reminiscent of E.T. (particularly those where Lizzie shows Tinkerbell around her room, showing off her numerous drawings of how she imagines fairies and their world look). But it’s a little churlish to criticise a direct to video children’s film for being a bit unoriginal, especially when the story is told as well as it is here. What Tinkerbell and the Great Fairy Rescue lacks in originality, it more than makes up for in wit, charm, and flat out sweetness. Quite simply, it’s a lovely, tender film.

Many of the other Tinkerbell films are similarly warm (check out Secret of the Wings and Legend of the Neverbeast for proof), but what puts Great Fairy Rescue out in front is the B-story, which finds Tink’s fairy friends mounting a rescue mission (obviously; come on guys, the clue’s in the title). While most of the Fairy films feel (understandably) small in scale, the addition of this adventurous subplot gives Great Fairy Rescue a sense of grandeur and pleasing difference in tone. On the one hand, we have a sweet love story, and on the other we have a rollicking adventure.

It’s a wonderful blend that makes for a beautifully entertaining and touching film.

Feminist fairies
Critically, it reconfigures expectations of what’s to be expected of the Fairy films. The greatest virtue of this series is that it’s undeniably and quite intentionally girly. These are films designed with little girls squarely in mind, and consequently we get love stories, fairies who are into fashion, and fairies who adore cuddly animals. Because, hey, some girls are into that and that’s cool. Because all those things are really cool.

But just because you’re into those things doesn’t mean you can’t be into great adventures, building things, and being fascinated by the way things work. Tinkerbell loves all those things, but she’s not Ripley or Sarah Connor. She’s a deliberately girly girl, she just likes adventure too. And that’s great, because the two are not mutually exclusive, and that such a wonderful message to be sending out to little girls. Grab your pink rucksacks kids, stick the Frozen soundtrack on, and go get muddy in a great adventure. Because you can do that!

This feminist approach also applies to the other fairies, who are sometimes selfish, sometimes ditzy, sometimes a bit stupid… Like Tinkerbell, these are female characters who make mistakes, do silly things, and have lessons to learn. But despite these flaws, they never ever stray from our affections. The films (and Great Fairy Rescue in particular) shows these flaws as part of their characters, and there’s a wonderful moment where Vidia (one of the vainer, more selfish fairies) confesses to being culpable for Tinkerbell’s capture, only for her friends to insist that she has nothing to feel guilty about.

So many female characters in films are expected to be perfect in order to be seen as ‘strong women’. The Disney Fairies films show that that doesn’t always have to be the case.

Faith, trust, and pixie dust…
Tinkerbell and the Great Fairy Rescue is light, but not devoid of substance or smarts. It’s a charming, sweet, and tender film that makes a virtue out of finetuning the new Tinkerbell into a character who is much more than fun sidekick, but a genuine hero for a generation of little girls who need and deserve a flawed, adventurous, girly character to look up to.

Next up in The Disney Review, a return to the classics with Sleeping Beauty. This will be preceded by 1953 Goofy short For Whom the Bulls Toil.

What do you think of Tinkerbell and the Great Fairy Rescue? Let me know in the comments and let’s get a Disney conversation flowing!

2 thoughts on “The Mouse House Movie Club #2: Tinkerbell and the Great Fairy Rescue”