Anyone who follows me on Twitter will know I have a deep, abiding love for the Disney short film, Paperman. If you haven’t seen it, it’s a sweet, lovely tale told in black and white about a bored office worker (George) who meets the girl of his dreams (Meg) on a train platform one blustery morning. The pair part, but when he spots her in the office opposite his, he tries to draw her attention by making and launching paper aeroplanes. Yep, it’s an amazing meet-cute as a short animation, and it’s absolutely magnificent.

In recent months, I’ve been trying to boost my confidence and have decided a good way to do that is by buying some cool t-shirts. As a previous blog explained, I’m a very shy person, but am hoping I can start to feel more comfortable standing out a bit, and maybe start some conversations with likeminded people because of the shirts. Progress on the confidence has been slow so far, but I’ve bought some super-cool shirts that I’m enjoying wearing.

I wanted to buy a Paperman shirt, but sadly I couldn’t find one. So, I decided to make my own by creating a stencil I could use to paint onto a shirt with. As I’m not a t-shirt designer, or artist, in any way shape or form, I wanted to keep things pretty simple. That’s when I came across a piece of Paperman art Disney released for Valentine’s Day 2014, a year after the film had been released with Wreck-It Ralph. It’s a beautiful piece, and it provided a route into what would become my Paperman shirt.

I didn’t just want to copy this pose, but I loved the line approach the artist had taken, and so wondered if I could transpose it onto a still from the film: namely the one of George and Meg on the train platform. So, I printed the still, got out my craft knife, and started experimenting.

Initially, I tried cutting out along the light being cast onto the characters, but that didn’t work. While it gave definition to the right side of their bodies (as the right is where the light is coming from), the left side was left completely blank. The result looked a bit weird, so I tried again, this time cutting out lines around the whole body.

It’s important to note that I didn’t simply cut their outline as then I’d just have a sillouhette. Instead, I cut out a stretch of line, then left a space, then cut out a bit more and left a space. I placed the stencil on a piece of paper, painted, and was left with the below.

I was pretty pleased with this, for a first attempt, but I still had George to do, and even on Meg there was room for improvement. The left hand side of her skirt was missing, her hair lacked definition, and her hands seemed to disappear into nothingness. I gave it another go, this time stencilling George too. Same technique applied: cut out the stencil, put on to paper, and paint.

Despite the paint bleeding, this was an improvement. The bleeding wasn’t a problem (as this was just a test, I hadn’t secured the stencil to the paper, so the paint ran under the stencil), and Meg’s skirt looked a lot better. George came out well too, and attempts to define hair showed improvements. All the other little issues, I knew how to solve, so it was on to making the proper, final stencil.

Before embarking upon this activity, I’d watched tutorials on YouTube, and they all recommended using ‘Freezer Paper’. This isn’t something I’ve encountered before in the UK, but it’s essentially food wrapping paper that’s like regular paper on one side and lightly waxed on the other. The wax is important because that’s what holds the stencil in place. You create the design on the papery side, put the waxy side onto your shirt, and iron, so the wax bonds just enough with the fabric to hold it in place while you paint. In other words: no bleeding!

I bought some Reynolds Freezer Paper from Amazon, placed a little of it over the stencils I’d already created, and started cutting along the lines. This was nerve-wracking as I knew it was for real this time. I took extra caution to get it right, but still took some risks by following my hunches and righting the mistakes of the test runs. I ended up with the below, which I placed over some black card help me more clearly identify where all the lines were.

Ready to take the plunge, I put the stencil on the shirt, ironed it, and applied the paint. Gulp!

This is the scary part, because there’s no happy medium. You’ve either created an excellent piece of art, or ruined a perfectly good shirt. What’s it going to be? In this case, I was convinced it was the later. As the lines were so thin and as I was unaccustomed to painting on fabric rather than paper, it didn’t feel like the paint was applying properly to the shirt, so I painted over some lines a few times. Had I done too much? Would the paint bleed because I’d over-painted? There was only one way to find out…

I left the shirt for the night, pleased with my efforts, but I couldn’t help but feel something was missing. It didn’t quite look complete: Meg and George seemed a little lost in the empty space without something to anchor them. So, I decided to push my luck the next day and create a stencil of the film’s title, written in its distinctive font.

This would be a challenge for two reasons: (1) the font has a handwritten quality that would be hard to reproduce with stencilling (2) the only way to create a stencil of letters with holes in them (a’s and e’s for example) is to keep the part you cut out and put it gently back into place when you come to ironing the stencil on. It was, not to put too fine a point on it, a massive pain in the arse. But once it was cut out and all the teeny tiny pieces carefully put in place, I ironed and painted and held my breath.

And reader… it worked! 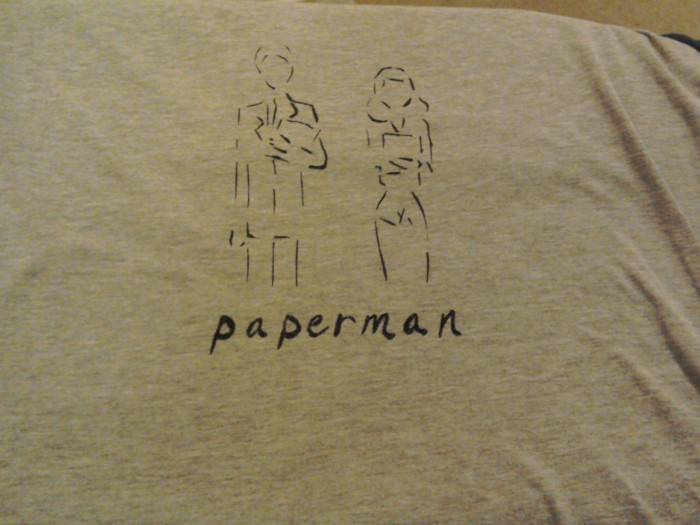 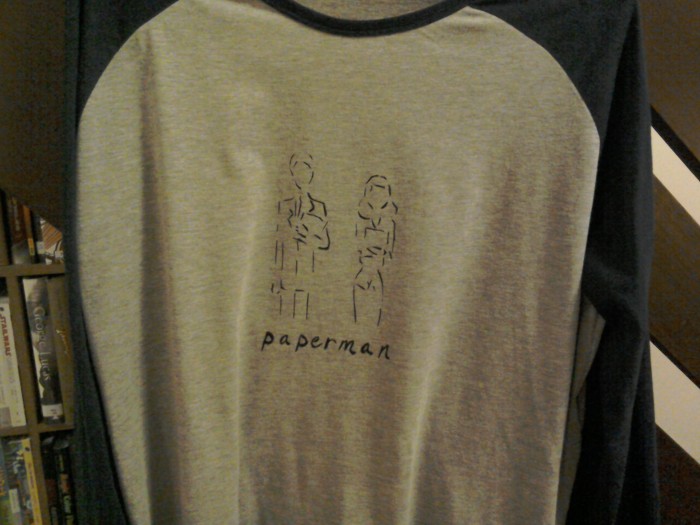 I literally let out a little sigh of relief when the stencil came off and looked good. Better than good, in fact. Fantastic! The text anchored the image and helped frame it in the t-shirt as a whole, making it seem less lost in the empty space. The font itself came through pretty well, not exactly looking handmade, but looking enough like the real font to feel right. I’d taken a risk and somehow it paid off.

I’d considered adding other elements to the shirt, but decided to quit while I was ahead. The shirt looks great as it is, and further tinkering would just complicate what’s a pretty nice, simple design. So, I gave it its first spin while I was in London for the Empire Live Moana and Pixar events, and it held up. No-one spotted the shirt, sadly, but I was happy with how it looked and the paint didn’t crumble or flake. My first t-shirt had been a success, and I’m already planning other designs to try out in the near future. 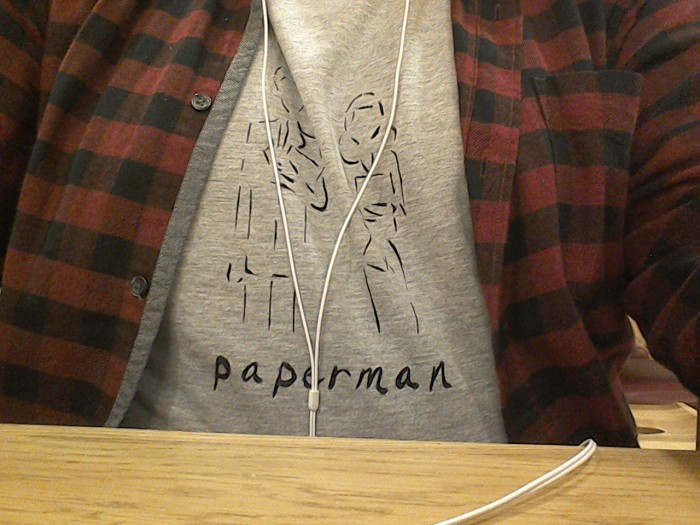 To make the shirt, I used the following:

5 thoughts on “Making a Paperman Shirt”