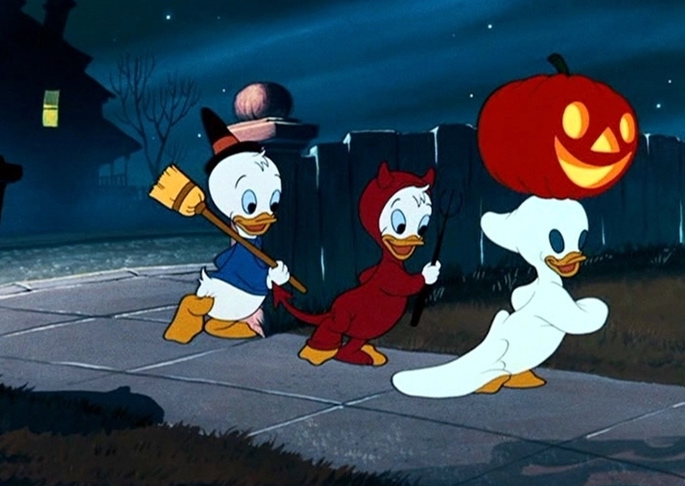 It’s October, and that means Halloween. Hurrah for falling leaves, long dark nights, and lots and lots of pumpkins. And hurrah too for scary movies!

Disney may not be known for their scary movies, but every now and then, they produce something utterly, brilliantly terrifying. Throughout October, this special strand of The Mouse House Movie Club will look at some of the very finest spooky Disney offerings, so you can add a little bit of Disney magic to your frightening fun.

So far in Mouse House Movie Club Goes Spooky, I’ve covered a couple of lesser know gems, so now I’ve opted for a classic. The Donald Duck film Trick or Treat is one of the best-know spooky Disney shorts, indeed one of the great spooky animations of all time. It’s so good, in fact, that it’s not just a great short. Duck legend Carl Barks took it to the page in a brilliant comic strip that’s become as well known as the film thanks to Barks’ creepy creation Smorgie the Bad being removed from his script. It is, in short, really damn good, and that’s because it’s a perfect storm of brilliance.

The first thing that strikes you about Trick or Treat is how beautiful it looks. Made in 1952, it boasts all the visual splendour of that period of Disney film-making, with its deep night skies and cosy suburban neighbourhoods. It’s a picture perfect vision of American life, similar to the one we’d see a few years later in Lady and the Tramp, and it adds a warmth to Trick or Treat that makes it impossible to resist. You want to live in this lovely little world, even if it does contain a nasty witch intent on making Donald’s life a misery.

Our ‘poor’ hero is subjected to an endless parade of tricks at the hands of Witch Hazel in the limited course of this short but, of course, the little shit deserves it. When Huey, Dewey, and Louie come knocking on his door in their adorable Halloween costumes, they get firecrackers instead of sweets from their ever-loving Unca Donald. This is because – and I can’t stress this enough – Donald Duck is a massive dickhead, and despite his obvious lovableness (how can you not love that voice), it’s great fun to see him tormented by Hazel and the nephews. In song, no less!

Like all great Halloween cartoons, there’s humour in amongst the macabre. Donald is attacked by a giant cackling pumpkin, bullied by crooning ghosts (always the best kind of ghost), and forced to dance until he can dance no more. It’s hilarious and one of the most GIFable Disney shorts of all time. Just look at this awesomeness. LOOK AT IT!

Despite all this, Donald never relents. Hazel repeatedly tells him he can stop the madness by simply giving his nephews the treat they deserve, but Donald keeps going, keeps believing he can ultimately win. It’s what makes Trick or Treat not just a great Halloween short, but also a great Donald short. Pop culture has rarely given us a character more pig-headed, more stubborn, more utterly determined to do the most stupid thing he can possibly do than Donald. It’s what makes him so charming, and so brilliantly iconic. He’s like a cartoon Sisyphus, doomed to endlessly repeat the same thing over and over and over again.

It’s tragic, it’s beautiful, it’s a melancholic insight into the foibles of the human soul. It’s also got amazing GIFs like this!

Until next time… stay eeire-sistible. (Ugh, that doesn’t even make sense!)