Last week, I wrote about Valentine’s Day and how, now more than ever, we shouldn’t judge it as a simple romantic holiday but an occasion to highlight the importance of love in all its many and varied forms. In this blog, however, I’m going to focus squarely on romantic love, because that’s important too and at this time of year, it seems to come under attack from people who aren’t in a relationship. Understandable, but still a little silly in my opinion.

How am I going to explore romantic love, I hear you ask? Through the medium of Disney’s short masterpiece, Paperman. Because I haven’t mentioned it before. Like ever. No seriously.

Paperman is about a lonely nobody called George who lives and works in a vaguely 1930s-esque metropolis. One day he encounters the girl of his dreams (Meg) and resorts to using paper aeroplanes to capture her attention when they’re parted. Our hero has no luck via this route, but eventually the fates take over and literally sweep the two young lovers up for a reunion on the train platform at which they first met. Awwwwww.

It’s absolutely goddamn lovely and were it possible, I’m pretty sure I’d propose to it. You want to do the same no doubt, but I’ve already bought the ring, so BACK OFF, ok.

I honestly believe that at the centre of Paperman is the essence of romance itself. I appreciate that’s a slightly grandiose statement and if you’re feeling cynical about love at the moment, you’re probably scoffing (or vomiting) at having read it. But I don’t care. It’s true, and if I (a pathetically lonely creature who at the age of 32 has never so much as held hands with a woman, never mind kissed or been in a relationship with one) can write it, you can sure as heck read it.

What makes Paperman so glorious is the way it juxtaposes the banal and the magical. George and Meg are pretty normal people making their way through a normal day, loaded with tedious paperwork and stuffed briefcases. They get the train, they make their way to a job they’d probably rather not be at, and they likely go home at night ready to do the exact same thing the next day. Had they never met, their lives would have continued as such, just as it did the day before. And the day before that. And the day before that. These are not the Princesses and Princes we’re used to seeing in Disney romances.

Director John Kahrs’ decision to make the film black-and-white adds to this sense of everyday banality. George and Meg live their lives in monotone and with its giant skyscrapers, speeding trains and uniform office environments (all beautifully captured by Kahrs’ camerawork), their world becomes a cage they stand little chance of escaping from. Until, of course, the fates take over and the wind blows a little piece of paper (of magic, of colour, of love) into their world. 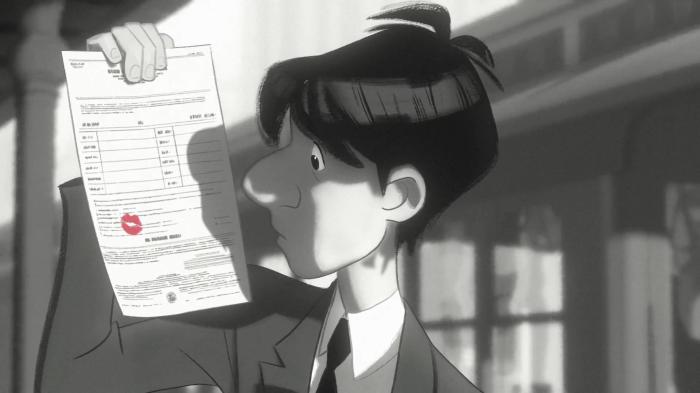 Meg stifles a laugh, George joins in after working out the joke, and with one tiny quirk of the weather, their lives are changed. But that’s not the end of it. Had George and Meg been separated and gone through a series of similarly serendipitous events before meeting again and forming a relationship, Paperman would be an enjoyable but rather unremarkable piece of film-making no different from the multitude of other romances out there. Love is lovely, it’d say, and that’s fine, because yes, of course, it is. But it’s also difficult and painful and all about the delicate decisions we have to take to make love happen. Paperman reflects that.

George’s delicate decision revolves around his job. He’s an office drone surrounded by men who look like they’ve forgotten how to spell love, never mind feel it. George is no doubt going the same way, but now, in Meg, he’s found a spark he wants to turn into a fire. Can he though? Can he really risk his livelihood for a girl he’s never spoken to just because he’s meet-cuted with her? It’s the kind of choice we all face: the choice between the practical and the romantic, the reality and the dream, the life we need to live in order to survive and the life we want to live in order to be happy.

Of course, George chooses love (Paperman would be pretty depressing if he ignored Meg), but he has to work for it. Every aeroplane he throws to win Meg’s attention fails: falling just short, straying just wide, or hitting a pigeon just as it’s about to sail through the window to its intended target. It’s almost like he’s being tested. The world wants to see his breaking point, to see just how much he wants to turn that spark into a fire. Every plane thrown, every despairing grunt, every frustrated moan is George’s fight against the fates – and eventually the fates reward his endeavour.

In a film about the meeting of, rather than the relationship between, George and Meg, the final act is the closest we get to seeing the rush of their love. This fantastical flurry of paper is the stuff that cinematic dreams are made of and it produces some of Paperman‘s most iconic imagery: the bounce of the failed planes as they slowly creep into life, the blur of the windows as Meg follows her aeroplane through the train, the thrill of George being dragged across the road by the aeroplanes, his pursuit literally putting his life in danger. It’s intoxicating and it allows the audience to feel the excitement and fear of the love the characters are chasing, and which we hope we’ll feel ourselves.

But I don’t care.

Last year, I fell in love with someone, and she seemed to like me back. Paperman was my go-to film for the warm fuzzies during that time. After years of nothing, it maintained my hope that this might finally be the time, that she might finally be the one. It wasn’t. And she wasn’t. And now, we haven’t spoken for months. But I still think of her, and I still care about her because I adored her as a friend before anything else. She was, and I expect still is, an incredible woman and she struggled with love as much as I did. She’s happy with someone else now, and I’m delighted for her. How could I not be? Nobody deserves a flurry of paper aeroplanes like she does.

As for me, I’m still alone, but Paperman remains my go-to film for the warm fuzzies. Because after years of nothing, it maintains my hope that eventually, there might finally be the time, and there might finally be the one. That’s what makes it so special. It reflects both the love you have, if you have it, and the love you hope you have, if you don’t have it. It keeps you going in all those giant grey offices where life seems to eek out its existence in the thin spaces between pieces of piled up paper. It keeps your head up even as you kick the street in frustration, feeling like the chance is gone forever. It keeps you believing that your very own train station is out there and some day, some way, some how you’ll meet that special someone.

It gives you hope and reminds you to keep hoping.

Because sometimes your paper aeroplane flies straight and true, and sometimes it strays just wide. The latter doesn’t mean you should give up hope that the former will ever happen. It just means that you need to make more paper aeroplanes. 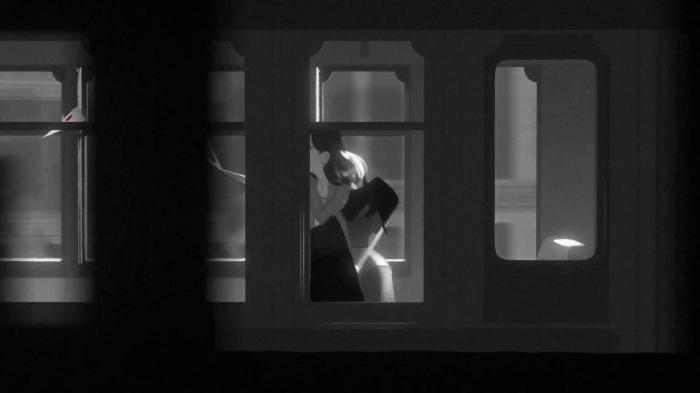 One thought on “Love and Paper Aeroplanes”